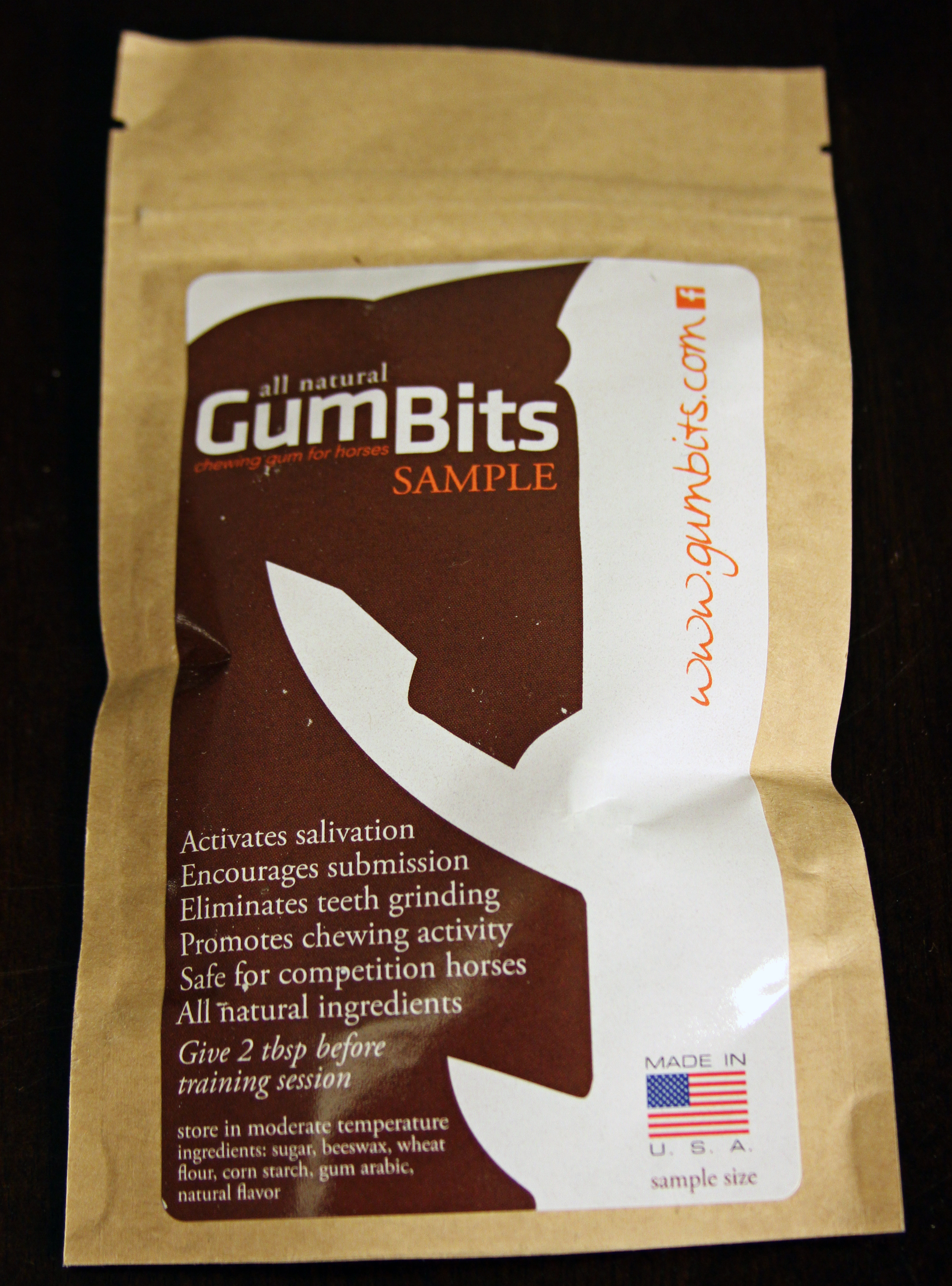 I was thrilled to see GumBits in the December 2015 A Horse Box and couldn't wait to try them. Turns out someone else at my barn wanted them too, and my sample disappeared one day out of my grooming tote! I can only assume some kid got hungry... I really don't know. The folks at A Horse Box were nice enough to send me more samples to try out on Champ, so here's our review on GumBits!

First thing I did was put one of these in my mouth. I figured I needed to see what exactly I was feeding Champ, and the best way to do that was to eat a couple. The little candy balls were hard on the outside (harder than I expected) and waxy on the inside. They are slightly sweet and minty. Not bad! The waxy insides stuck to my teeth a bit and I chewed around a bit trying to get it off my teeth. It took a while, but it finally wore off.

When it comes to finding out ways to eke out extra points in our dressage tests, the Eventing crowd has an all new fervor for getting that competitive score. Gone are the days when you could perform a passable test and finish on that score to win a competition.

Now you have to be a step above the necessary requirements for your level in order to be competitive at all, and that goes for everything from Beginner Novice to Four-Star.

When people hear a horse grind its teeth, the immediate assumption is that the behavior is caused somehow by the rider. This generally isn't the case, at least not directly.

A product called GumBits is being marketed as a way to eliminate teeth grinding, plus it's supposed to promote chewing activity, salivation and encourage submission to the bit. We decided to take a look to see if this product could really help these problems, but first we considered the cause of teeth grinding.

So I thought it was about time I did a little update on how Dustry has been getting on with his Atlanta Gumbits, his 'secret weapon'. I started using these treats back in June 2012 because he had developed a habit of scrunching his bit in time with his movement! As much as this shows he has an obvious musical flair, it doesn't bode well during a dressage test when this sort of thing will be marked down, and penalised as 'tension'.

Gumbits (for teeth grinders) Review
July 18, 2012 | Horse Forum
Today I tried Gumbits. If you aren't sure what they are You can read here GUMBITS CONCEPTION for the story behind Gumbits, why they were invented, etc.... They were created by a USEF Dressage Judge when she bought a horse with a bad tooth grinding problem due to nothing but habit (like my Cinny).

So seeing as I have had such great success with a new product I thought it only fair to share my latest secret weapon with GHE fans!

Dustry has a bad habit of scrunching on his bit at times when working. It's not through tension or pain, it's just a left over bad habit from his racing days, and up until now I have just ignored it, but now that we are starting to get out and about competing it needs to be stopped, because it will cost us valuable marks in the dressage phase if the judge hears him scrunching on his bit it will be marked down as 'lack of submission' or 'tension' .

Gumbits: Grinding away at a problem
December 27, 2010 | Behind the Bit Blog

When I reported on Riley's "behavior du jour" -- grinding his teeth -- dressagemom of dressagemom.com contacted me and recommended that I try Gumbits. She had seen the product used successfully, and she tried a few herself. She described them as tasty and waxy-feeling. There is an article about Gumbits on HorsesDaily.com, and an article in Horse Journal gives them a thumbs up.When I searched the usual online forums there were quite a few success stories. Not one poster said "they didn't have any effect."